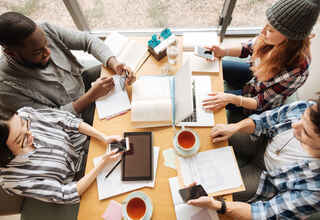 Over half of students increasingly politicised by Coronavirus, as students feel ignored by government

Confidence in devolved governments is generally higher among students, but has decreased since September, as a third of students in Scotland do not feel the Scottish government is acting in their best interests (up from 20 per cent in September). Similar proportions feel the same way in Wales (38 per cent) and this has again increased since our last survey (24 per cent).

The pandemic is galvanising a new generation of students. Over half of students (52%) now feel more political as a result of Coronavirus. This has increased since September (46%). That it is younger students (16-22 years) most likely to feel this way suggests that this moment carries huge potential to shape the politics of a generation.

The Coronavirus and Students Survey phase III took place in November and involved over 4,000 students, building upon the previous research issued by NUS in April and September 2020. As was the case in September, the majority told us they did not trust the UK govt to do the right thing for students during a second wave of the virus.

Regardless students continue to act responsibly during the pandemic. The majority of students continue report keeping themselves up to date with the information provided by the UK and/or the relevant devolved governments. Adherence to the government’s guidelines on restricted social interactions is high, with nearly four in five saying they adhere, and only 4% having personally, or known someone else, to have received a penalty for breaking government guidance.

Positively the perceived clarity of key messages from the UK Government on social distancing appears to have improved since July, with its new slogan ‘Hands. Face. Space’ considered to be fairly, very or extremely clear by two in three students.

Students believe that the biggest single priority for the UK Government is for them to provide better, honest and clear information. Similarly one of the key things students would like to tell the government is to be consistent, truthful and honest.

“Government failures are politicising a generation. Whether it be the A-levels fiasco, the masses of student lockdowns or the financial exploitation students are facing, we are fed up and acutely aware that the problems arising are indicative of foundational flaws in our education system that this Government has failed to reckon with. That’s why huge swathes of us are already taking action across the country by organising rent strikes and campaigning against digital poverty and educational injustice.”

“It has been a year since this government came to power, and they have consistently ignored the needs of students. Students deserve better than this, and we need the government to rectify their failings, starting by providing financial support to get money back in students’ pockets, investing in mental health services and in the digital infrastructure needed to make online learning more accessible.

“These findings should come as a stark warning to the government. Students will remember how they are being treated right now when the next General Election comes round. For many, it will be their first time at the ballot box and so far very little has been done to earn their vote.”