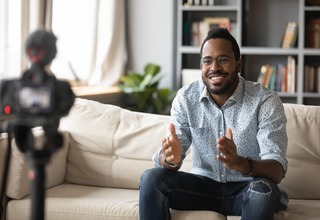 While they're not suitable for every type of job, video CVs are increasing in popularity. With employers typically inundated with applications for every advertised role, it's important to make your CV stand out. One way that career-savvy graduates are doing this is by submitting their CV in video format.

Despite the common perception that video CVs are only applicable to certain vocations, they can get you noticed by recruiters in any sector.

A video CV is a short visual recording used by a candidate to apply for a job. Instead of replacing traditional CVs, a video CV is used to supplement a written application.

They can either be uploaded to a video hosting site on the internet or sent as a video file directly to employers via email.

The purpose of a CV in this format is to highlight a candidate's skills and experience while giving employers an insight into their personality.

'I grew up with dyslexia so I wasn't very good at spelling and writing and I felt like a conventional, CV wasn't going to convey who I was, what I stood for and what I could bring to an organisation,' explains University of Kent graduate Mark Leruste.

'I decided to do a video CV to try and target the creative industries, advertising in particular. A friend who worked in the field told me that to get noticed I had to stand out and that's how I came up with the idea of a video CV.'

Video CVs are usually between one and three minutes long. It's important to grab a recruiter's attention while keeping the running time of the video to a minimum.

Nick Belling, a graduate who studied for a Bachelors in Information Technology (Software Design and Development) at Charles Sturt University in Australia has a similar story. 'I created a video CV because I needed to be seen. I was struggling to get interviews with employers because of my lack of experience.'

When to use one

The idea of getting in front of a camera and putting yourself in the public domain can be scary, but in some industries a video CV can really set you apart.

Video CVs are most commonly used to apply for creative and customer-facing roles in sectors such as advertising, creative arts, marketing, media, PR and sales.

This being said, recorded CVs don't have to be restricted to particular jobs or industries. They can also be particularly useful when applying for digital, journalism, fashion or IT related roles.

However, with more traditional jobs, such as those in law, accounting, medicine, construction etc., a video CV may not always be appropriate.

When deciding whether to use a video CV take into consideration the job you're applying for and the company you hope to join. Do some research into the culture of the organisation to help you decide whether it's suitable.

It's also a good idea to weigh up the advantages and disadvantages of this method of application before making the decision.

Video CVs have a number of advantages. For example, they can help you:

However, they also have their share of disadvantages. They could:

If you decide to give it a go, there are a number of things to consider before you start filming. First off, Mark advises against being daunted by the quality of other video CVs you find online. Remember the aim isn't to be the next Steven Spielberg, but rather to give a glimpse into who you are and how you can help organisations grow.

To begin with, write down what you'd like to say. Don't attempt to film the video without a script -this can lead to you forgetting important points or waffling to fill the time. It's fine to ad lib a little but try not to lose track of what you want to say. Learning your script beforehand also prevents you from having to read from an autocue or notes.

Plan the location of your video to ensure that you have a quiet, well-lit space to film in. You'll also need to consider the backdrop of your recording. It should be clear and free from clutter.

Appearance also matters. Plan your outfit in advance, making sure to dress as you would for an interview. This could mean a suit and tie or business casual - take your cue from the type of organisation that you're applying to.

'Have fun with your video CV and enjoy making it,' says Mark. 'Think about what you want to say beforehand and have an idea of what you want the video to look like. Don't hesitate to start recording, you'll only get better with practice.'

Mark stresses the importance of being genuine. 'It's tempting to copy another video CV, but you'll have more fun and stand out more by being yourself.'

Structure the video so that it has a beginning, middle and end. Start by introducing yourself, explaining why you've created the video and why you're the right person for the job.

Talk about your unique selling points and any relevant skills and experience, showing examples of your work and demonstrating your skills through the use of slideshows, clips or on-screen graphics.

At the end of your video summarise what you have told the employer and reiterate why you're right for the role. Thank them for watching the video and include your contact details. Link to online platforms that could strengthen your application, such as a website or social media account.

'The most important thing to demonstrate in a video CV is your passion and capability,' says Mark.

The format of the video could be a project showcase, mock interview (where you answer relevant questions to camera) or a narrated timeline of your experience and achievements. The choice is yours.

'Let your personality shine and, where appropriate be funny. Funny is shareable,' advises Nick.

As well as practical considerations such as location and script, you'll also need to consider technical aspects such as filming equipment, the editing process and how you'll make the video accessible to recruiters.

You'll need a computer, internet access and a camera as a minimum. You may also need a tripod, lighting and editing software such as Microsoft Movie Maker or Apple iMovie.

If you have a smart phone with a high quality camera you could use this, but if you want it to look professional it's best to use a decent DSLR camera. 'Using a low-quality camera is the equivalent of handing in your CV scribbled onto a napkin,' adds Nick.

'Make sure the audio quality is good,' advises Mark. 'You could probably get away with a slightly less high quality video, but the audio must be perfect. Employers will switch off if they can’t hear what you're saying.'

When filming, make the video dynamic by using different shots and camera angles. Do as many takes as possible to give you something to work with during the editing process, arguably one of the most important steps to creating a great video CV.

It's at this stage that you can tighten up your video, reordering and tweaking shots, cutting bits that didn't work and adding visual effects (such as pointing to text as it appears on screen). The scenes that make the final cut should be those that portray you in the best possible light.

'Be prepared to spend a lot of time refining your recording,' warns Nick.

'If editing isn't a skill you possess you can always ask a friend or put the word out online for someone who might be able to help,' adds Mark.

Once you have a finished video you need to decide how you'll make this accessible to recruiters. 'I would suggest uploading the video to the internet on a platform such as Vimeo or YouTube,' says Mark. 'You can then send these links to employers via email or you could host the video on your social media platforms or on your own website.'